Some types of Google Ads have been easier to assess in terms of success than others. Search Ads designed to drive clicks or phone calls, for example, are exceptionally easy to track— users make a call through your ad extension, and you have quantifiable data.

Other types of ad formats can be a little trickier— especially when it comes to video content. How much is a video view on a YouTube or Google Display Ad actually worth? And how do you know that it’s “working?”

There are a variety of different metrics to help you assess this, but Google’s Engaged-view conversions metric is a good one to look at.

In this post, we’re going to look at the Engaged-view Conversions metric and what it means for advertisers.

What Are Google’s Engaged-View Conversions?

An Engaged-view conversion is a video-specific metric that applies exclusively to YouTube Ads and Google Display Network video ads.

They don’t have to click on the video ad and purchase immediately— and that’s significant due to the consumer behavior of YouTube users.

YouTube video viewers have an incredibly strong intention to watch the content they’ve clicked on. They’ve come to YouTube for the sole purpose of watching video content, and they’re invested before their video of choice even loads.

Because of that, we know that these users are incredibly likely to keep watching even when they see an ad before the clicked video starts. They’ll even buy— 70% of YouTube’s own viewers say that they made a purchase as a result of discovering the brand on the channel.

The difficult part, of course, is that most users don’t make a purchasing action immediately after viewing a video ad; they’ll wait until after they’ve watched the video they came to see, and maybe even a few more.

The Engaged-view conversions metric is, according to Google, one of the more accurate ways to measure real performance that come from direct response video ads. It gives you a much better idea of actual user engagement, which means you can better understand the value your ads offer and how impactful they are on your overall marketing efforts.

We’ve focused predominantly on YouTube so far, but Engaged-view conversions are available for Google’s Display Network Ads, too.

Responsive Display Ads can include video assets, including those that you upload manually and those that are auto-generated based on the text and images you’ve already uploaded.

Engaged-view conversions can be just as important for Display Ads as Youtube; plenty of users want to finish reading the content they came to find before clicking or researching an ad they found interesting. Watching for this metric for Display Ads is crucial.

When it comes to Google Ads reporting, you’ll see your engaged-view conversions metric showing up in different places depending on the specific campaign types that you’re evaluating.

For Display Ads, this metric will be found under the “All conversions” column of Display campaign reporting.

In Video and App campaigns, this metric will be included in the “Interactions” column of reporting. Other interactions include clicks, swipes, and views.

To compare click-through conversions or interactions to Engaged-view conversions, click the Segments icon in Conversions and in the “Conversions” menu, click “Ad event type.” 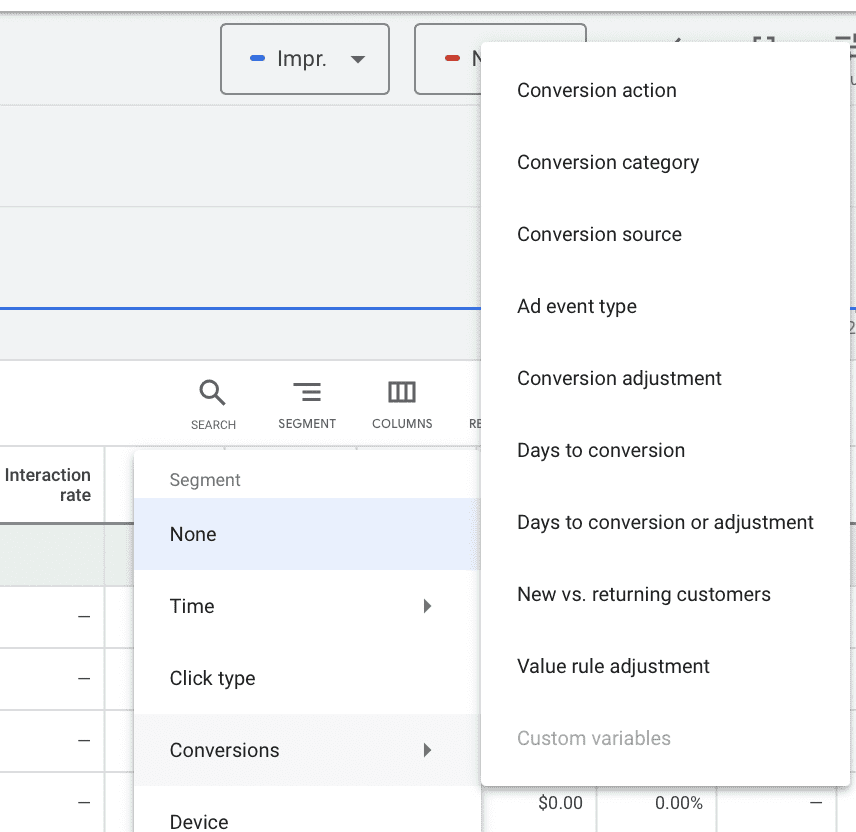 What’s the Difference Between Engaged-View Conversions & View Through Conversions?

For some of our readers, Engaged-view conversions can sound fairly similar to view-through conversions, but there is a core difference.

View-through conversions tell you when customers see your ad, don’t interact, but later convert. With Display Ads, a view is considered when at least 50% of the ad is onscreen for at least one second; it does not have to be a video ad. They also exclude conversions from people who have interacted with any of your other ads. On video ads, views are counted when someone watches 30 seconds of the video (or the whole ad if it’s shorter than 30 seconds) or clicks on the ad.

An engaged-view conversion, on the other hand, is a video-specific metric. It also requires only ten seconds of viewing, or the entire ad if it’s less than ten seconds.

As a quick recap: Attribution windows tell Google how long a conversion should count after your ad was viewed.

If someone views a video ad but converts within a day, your ad likely had something to do with that. If they see your video ad and don’t convert until two years later, it’s less likely the ad was responsible. Attribution windows help moderate that, ensuring that you’re most accurately assessing which ad campaigns drove what results.

The default attribution windows for engaged-view conversions depend entirely on which ad format you’re using, and they include the following:

If you’re running video ads through Google— whether on YouTube Ads, Display Ads, or both— it’s crucial to keep a close eye on your engaged-view conversions. These will be lumped into either your conversions column or your interactions column in the reporting dashboard depending on the ad type you run, but you can filter them out to get a good idea of how users are interacting with your ads and what’s driving them to convert.

Want to learn more about how to make sense of your Google Ad campaigns and optimize them accordingly? Check out our ultimate Google Ads guides here!

Explode your results in weeks, not months, by using these nine powerful secrets — unknown to 95% of advertisers

Included in this free e-book:

Where Should We Send Your FREE Report?